When the Reichardts settled in the hills above Goldstream Valley in 1973, they grew their own food, in part, to save money. And because it was something Terry had always done. Their garden adapted to the needs and demands of a growing family. Less time meant more weeds, but three kids meant a lot of extra helping hands.

Terry estimates that while they were raising their kids, a half to a third of their diet was homegrown. Breakfast consisted of homemade granola, eggs from their chickens, and milk and yogurt from their goats. A few garden veggies were snuck into the kids’ lunches, and dinners were always homegrown or otherwise procured from the landscape.

As the kids grew up and left home, it became easier to increase the amount of their diet that was homegrown. “Right now, I’d say almost all of our food is homegrown (or hunted, fished or gathered),’ Terry said. They still buy coffee and fruit but very little grain or products from grain, at least not for themselves. At one point Terry wondered, why not eat vegetables for breakfast instead of buying grains to make cereal?

Terry does grow a few grains, including quinoa, but finds the threshing makes it labor intensive. They also make some adjustments for guests. Terry said, “We have people come over regularly. I noticed they’re not used to eating like we do.’ She finds they crave something salty or starchy like crackers, pasta or rice.

I was also curious to know how Terry dealt with two scenarios that can derail any diet – camping and eating out. I pictured a backpack full of vegetables, but Terry explained that, especially while hunting, they usually purchase freeze-dried meals and nuts, a particularly valuable source of lightweight and energy-intensive food. She confessed to enjoying restaurant meals occasionally, not so much for the food as for the service and atmosphere.

Her commitment to health and eating local has led Terry to come up with her own recipes, which she freely shares with her gardening students. So-called gourmet recipes with hard to find, exotic ingredients, too much sugar and too much butter annoy her. “I suspect that if most people would stop worrying about all the special things that different foods do for their health, and if they would just eat what they produced, they’d be very healthy.’

So how do they do it? And why? Hard work. Relentless dedication. Ceaseless experimentation. A deep understanding of science. A spiritual conviction that living sustainably and living with what we have honors God’s Earth. Terry explains, “The main reason we grow our food is more of a personal faith issue – the way I see the world. And it does seem to me that most of our wars in recent years have been due to a dependence on the resources of other countries. It’s just a crazy way to live. If we could learn to live within our own resources I think the world would be a lot happier.’

Terry’s familiarity with cultivars (vegetable, grains, herb, and fruit) appropriate for Interior Alaska, and, in particular her garden, is unmatched. It’s not far off to say she is a one-woman experiment station. Vegetables star in her garden and include corn, asparagus, winter squash, fresh and dried legumes, greens, cucumbers, tomatoes, celery, peppers, onions, and more.

By keeping meticulous records and constantly trying new varieties alongside her old standbys, she has assembled an extensive – and most importantly – up-to-date list of the best varieties for Fairbanks. She chooses this one because it stores well, this one because it tastes better, and that one because it’s more productive. Terry says, “It’s pretty hard not to keep trying things, easier ways to grow things.’ But she laments the loss of many of the varieties that grow best in Interior Alaska as seed companies consolidate and discontinue less popular varieties. When I asked her how the university could help, she answered, by “developing new varieties.’

Along with her variety testing, she’s got a bag of tricks you would never find on a university research site. They’re not appropriate on a commercial scale, but useful for a dedicated home gardener. For instance, to be freed from the demands of the garden so they can go hunting or on a ski trip or visit their children, Terry uses a small piece of plastic tubing tied with a knot to let just enough water drip into a tomato pot or what-have-you. To eke out a second-wind harvest for broccoli, Terry will let her broccoli grow long after the center head has been eaten, and she will prune the stalks a bit to encourage shoots and suckers that can equal, if not exceed, the initial harvest. 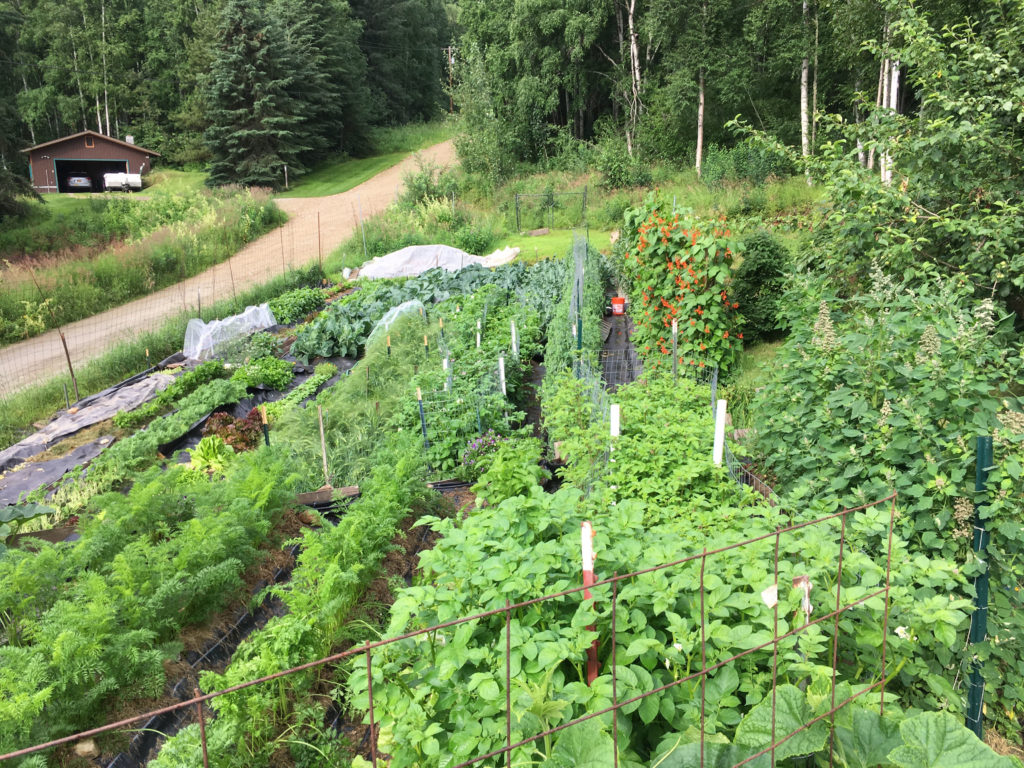 With an uber-productive garden comes the challenge of storage and preservation. In addition to canning, freezing, and drying their food, the Reichardts stock a root cellar. By foregoing the convenience of a walk-in entrance, their cellar doesn’t require added heat. Instead, they make do with a trapdoor and a ladder. To get their vegetables in and out of the root cellar, they wedge themselves in between the box of vegetables and the ladder to free up their hands for holding onto the ladder.

Terry eschews the easier design of a walk-in type root cellar because that design lets out too much heat. The way they haul produce up and down the ladder is about as impressive as Santa squeezing through a chimney. Oh, and in the fall, you probably won’t find much unused space in the Reichardt house. Based on the ideal humidity and temperature storage requirements, you could find onions in the entryway, garlic in the closet, winter squash under a desk and herbs in a drawer.

While maintaining the garden and putting up food for the winter, they squeeze in their gathering, fishing and hunting activities. In addition to picking wild berries, Terry will stop along the Chena River to collect the prolific and invasive dried seeds of the Siberian Pea, a small, high protein seed that is delicious when cooked with spice and herb flavors. And she does it while on her bike.

When fishing in Chitina, Terry doesn’t let much go to waste. She simmers fish bones and heads to make broth (to can or freeze) or composts them to provide a welcome source of nitrogen for her garden. She has been known to collect unwanted fish bones and heads from other fishermen as well. When the Reichardts found themselves with a particularly fat caribou, Terry lamented the waste of all that fat. After some contemplation, she found that she could make some decent candles with the fat, and even moisturizer.

Terry finds all manner of ways to tread more lightly in this world through being thankful for what she has and finding creative ways to use less.

Terry shares her extensive, unique and local knowledge in two gardening sessions each year (one in the fall and one in the spring), each consisting of about eight classes. In addition, she welcomes people to her garden – to help, observe or ask questions. For those who can’t fit the class into their schedules, or are not in Fairbanks, you can learn about Terry’s garden, attached greenhouse, and root cellar on YouTube. For information on preserving food go to UAF Extension’s website.

It’s a stretch to say that anyone can do what the Reichardts do. But they show us that one dedicated, hardworking family can eat almost entirely local – and not just for one year. Terry asserts, “When you put a little effort into being a little more self-sufficient, you find that it’s delightful. You’re not giving up a lot.”

If you don’t want to or can’t grow very much of your own food, consider buying it locally.

Other examples of locavores in the North:
Matt Oster and Saskia Esslinger grew much of their own food on an urban homestead in Anchorage, Alaska for one year.
Suzanne Crocker and her family of five, ate only food that could be hunted, fished, gathered, grown or raised around Dawson City, Yukon for a year.
Julie and Miki Collins have lived off the land near Denali National Park for most of their lives.
Seth Kantner grew up living off the land in Northwest Alaska.

I acknowledge that Alaska Natives are the first and best example of what means to be a locavore, whether food is grown, gathered, hunted or fished.