For some, blueberry* picking is a laid-back, fun activity. For my family, it’s a competitive sport—the winner being the one who picks the most and biggest berries in the least amount of time. 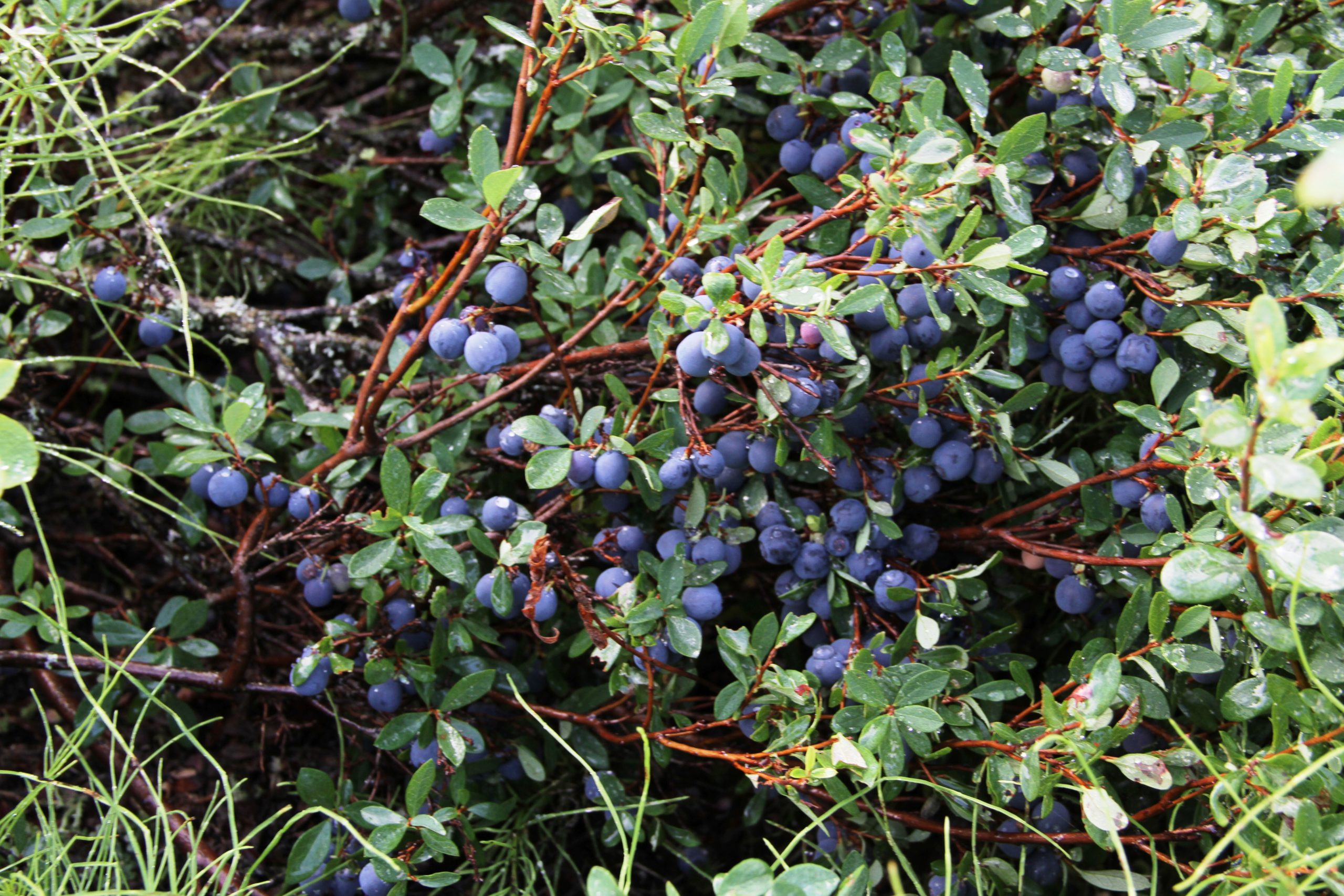 A little pruning goes a long ways — this heavily laden bush was in my backyard where I regularly pruned the bushes.

Picking berries is also something that brings us together. It’s something I’ve done with my grandma, mother and sisters since I was young, something my daughters do with me and something that results in a tasty reward chock-full of antioxidants. Wild or citified, learning a little about these marvelous blue pearls can help us protect and boost their production for generations to come.

First, the land may need protection. The Blueberry Preserve in Goldstream Valley exemplifies how a community coalesced to protect a popular and productive blueberry spot. On private land, protect your berries by not building or landscaping over them. Trust me, it’s easier to maintain a blueberry patch than a lawn and a lot yummier, too.

Invasive species are another looming threat to blueberries. Many people remarked on the bountiful, hefty blueberries this year. Did you notice how lush the bird vetch was too? Although there are many invasive species to weed and control, bird vetch is particularly onerous because it can invade undisturbed areas, unlike many invasive species that only thrive in disturbed areas. The Winterberry Project is a great resource for helping to monitor berry patches across Alaska especially in the face of a changing climate. 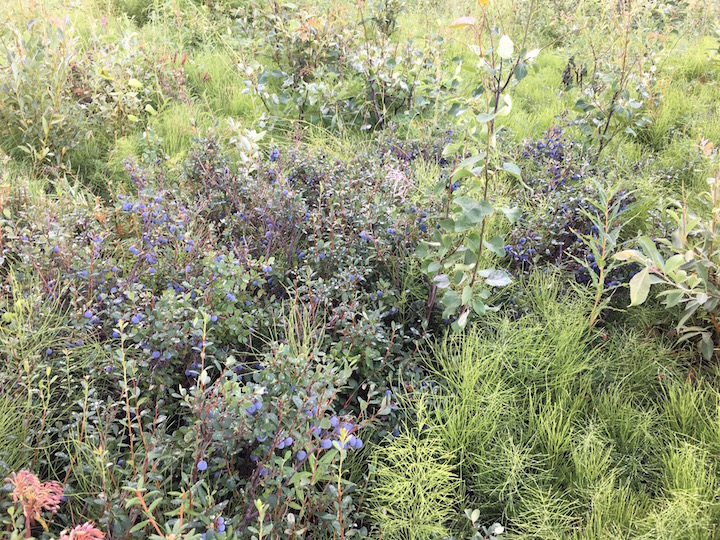 These blueberries were pruned and lightly cultivated in our backyard.

Now let’s talk about the dos and don’ts of how you get those berries into your bucket, including the contentious subject of the dreadfully destructive or wonderfully useful rake. I myself, have never touched the rake. Maybe because it feels like cheating. Or maybe because I never bother removing leaves, sticks or bugs from my berries—and I’ve heard you can end up with a ton of them when you use the rake. Also, I know that gently plucking the berries with my fingers can result in squished berries if they are just a bit too overripe—inevitably some always are. I imagine if you’re picking ripe blueberries with a rake, you’re going to end up with blueberry slop.

I asked Pat Holloway, professor emeritus of horticulture at the University of Alaska Fairbanks, what her thoughts were on the rake. Among other things, she is an expert on berries. In an email, she responded, “Blueberry rakes can cause an enormous amount of damage if people are in a hurry to fill their buckets.” If you are going to use the rake, she admonishes, “Very slowly comb the bush from the bottom up, and when you encounter resistance, don’t rip the rake through the plant, use your hands to push through the foliage.” She said that a rake with flexible wire loops is better than one with wooden tines and that lingonberries are better suited to raking since they’re firmer.

If you’re not careful (and probably even if you are), you’re going to harvest a great deal of leaves, which will, over time, result in a less vigorous plant. More imminently, you may be stripping off flower buds that would have turned into next year’s berries, according to Holloway. Buds begin forming as early as late June. 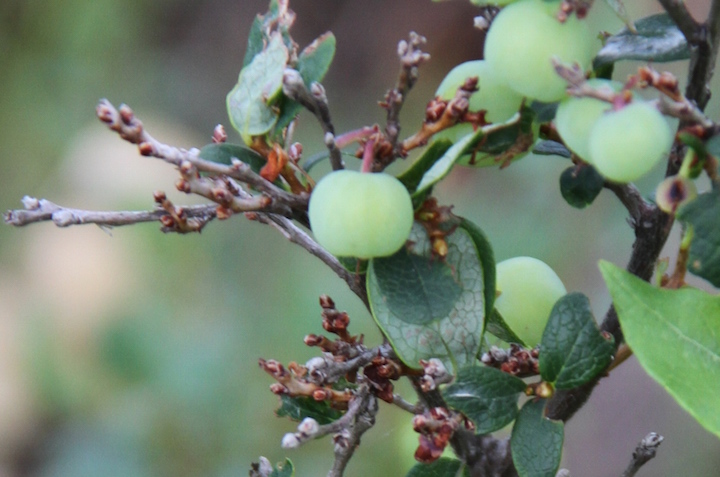 These flower buds portend a bountiful blueberry season for the following year.

Now how do you keep a backyard blueberry patch productive? There are several easy things you can do in a privately owned patch to increase production and ensure they keep producing:

Unfortunately, we don’t have well-researched guidelines on cultivating lowbush blueberries in Alaska. You can use other blueberry production guides like this one, from Maine Cooperative Extension Service as a general guide. Just keep in mind that you’re dealing with a different species, a different climate, and a different growing season. In Maine, it’s possible to produce 10,000 pounds per acre. It makes me wonder—how many pounds of lowbush blueberries could you produce on an acre?

If you don’t have a blueberry patch in your backyard and want one, there are a few ways you can establish a patch. Don’t bother experimenting with non-native blueberries. Holloway and local master gardeners already have without success. They consistently found that, although the plants do grow, only the part of the plant below snow level survives and produces berries—and not many at that. Papa Meunier and Charlie Knight proved that bog blueberries could be propagated and cultivated. You can propagate your own blueberry plants from seed or cuttings, too. You’ll want to choose plants with large and plentiful berries. Remember, it’s illegal to dig up or take wild blueberry plants on public lands without a permit and on private lands without permission.

Enjoy your blueberries, however, you come by them. And if I see your blueberry photos online, I’ll ask you where you picked them but I’ll never share my spots.

Previously published in the Fairbanks Daily News-Miner on August 27, 2016.

*In this post, when I say blueberry, I’m mainly referring to lowbush or bog blueberries, or more precisely, Vaccinium uliginosum L., the most common species in Alaska.