In spring of 2018 I had the happy excuse to visit five farms in Homer–to film high tunnels and season extension techniques for a YouTube series called, In the Alaska Garden with Heidi Rader. While I was there, I kind of fell in love with those farmers. Their passion, tenacity, and creativity was infectious and rekindled my own dream of being a farmer I discovered they’re innovating in lots more ways than high tunnels. I say farmers but they all also identify strongly with the term “market gardener”–a term that describes farmers who grow food predominately for direct markets using mostly low-tech, hand tools on small acreage. They are voracious readers, watchers of YouTube videos, and sharers of ideas. Some of their favorite authors and vloggers include Eliot Coleman (The Four Season Farm), Ben Hartman (The Lean Farm), Curtis Stone (The Urban Farmer), and Jean-Martin Fortier (The Market Gardener). 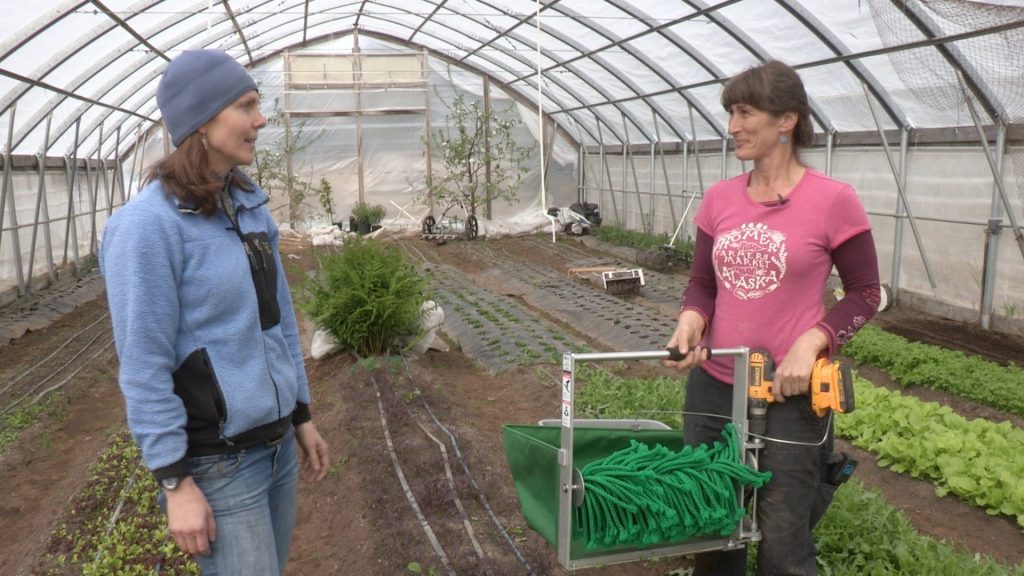 Carey Restino demonstrates how to cut greens with her Quick Cut Greens Harvester. The harvester is powered by a cordless drill. Photo by Jeff Faye.

My first stop was Homer Hilltop Farm where Carey Restino has carved out a farm that winds through forest and devil’s club on Diamond Ridge. Carey exuded energy as she showed me her high tunnels and hoop houses that have helped her dramatically extend her season in a microclimate that is cooler than Homer proper due to its higher elevation. She had an impressive lineup of the latest, low-tech tools designed for market gardeners including a six-row seeder, a Quick Cut Greens Harvester, and a soil tilther to name a few. 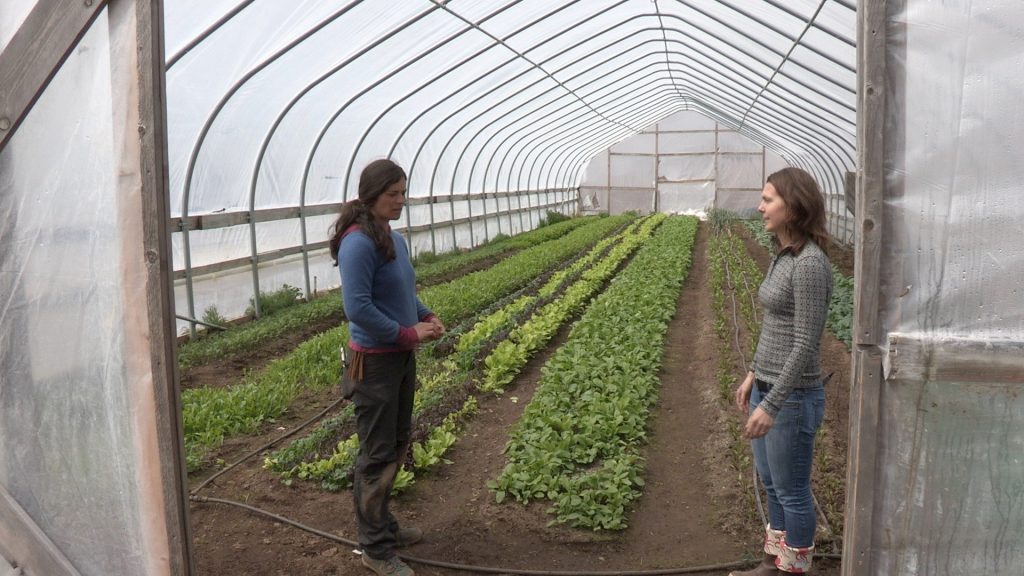 Next stop–Twitter Creek Gardens. Emily Garrity’s no-nonsense attitude was evident in her well-run, efficient farm. Emily’s methods of extending the season range from a small hoop house to a large, Rimol movable tunnel, which is very easily moved by two people–I know I moved it!  Her passive solar greenhouse was also a highlight. It allows her to grow greens into the winter and early in the spring. Her seedlings stay cozy high up in an attic of the greenhouse. In addition to a CSA, she also sells through the Alaska Food Hub, the coolest kid on the block for direct-marketing methods. It makes it easy for farmers to sell and consumers to buy locally grown products by aggregating them on an easy-to-use website. It’s one-stop shopping at its finest. 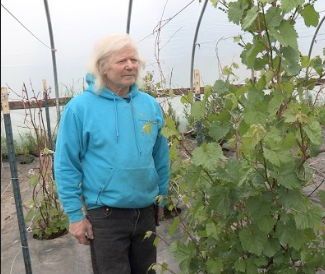 Don McNamara stands next to his healthy-looking grape vines inside a high tunnel. Photo by Jeff Faye.

At Oceanside Farms, I had the pleasure of visiting Don McNamara and Donna Rae Faulkner. I’d met them before as students in the Alaska Growers School, an intensive beginning farmer training program for would-be farmers that I spear-headed, so it was fun to see them still at it with gusto. They also happen to be famous and were mentioned in an article about high tunnels in Homer in the Economist. They began their farming adventure as urban farmers, where, in addition to their own land, they farmed on others’ city lots. This is a movement that has been written and vlogged about by Curtis Stone. Briefly, the movement argues that land dedicated to growing lawns in urban areas is better used to grow food. It’s easier to sell food when you’re in an urban area as opposed to rural areas where sometimes there are long driving times to get your products to the market. They quickly outgrew the small city lots and now have a parcel a couple of miles out of town where they have erected eight, 30-by-72-foot high tunnels. Each high tunnel had its own unlikely surprise–hops in one, grapes in another, domesticated blueberries here, vigorous strawberry plants in May there. Though not certified, the couple’s scavenging instincts and dedication to organic farming methods lead them to the fish docks in the winter, coffee shops, and the food bank to concoct their steaming, fragrant compost piles that are the foundation of their farm.

At Synergy Garden, Lori and Wayne Jenkins showed some compelling examples of the benefits of high tunnels. Garlic and asparagus were growing like gangbusters in the tunnel while barely emerging or not yet emerged outside.

The last farm I visited, Will Grow Farm, is an off-grid farm that originally lacked road access. Before Paul and Jen Castellani had a road road, they had to hike their vegetables out. This meant they had to consider the weight of vegetables they grew, choosing lettuce over potatoes for instance. It’s still debatable whether there is road access. To get there, I pushed the limits of my rental agreement on a bumpy road, then walked across a muddy impassable section, then drove the last part in Paul’s old pickup that has been relegated to that purpose. With limited electricity from a generator and solar power, they carefully strategize their operation by limiting water pumps needed and eschewing energy-guzzling refrigeration.

Along with visiting farms, I sampled locally grown fare at an impressive number of restaurants for a small town like Homer. The Alaska Division of Agriculture identified eight restaurants in Homer that serve up Alaska grown food compared with Fairbanks, which in spite of being at least five times larger, had only three restaurants. It’s evident that the community of Homer cares about food–where it comes from and how it tastes. When eating with the locals, the topic of conversation continuously swirled around the best things to eat at which restaurants and who served local food. Homer is fanatical about local food, and makes it known with their pocketbooks.

It’s no wonder the high tunnels are popular there because it makes working on a farm comfortable in the rainy, cold weather. The longer season means that making a living by farming is easier–while still not being easy–to grasp. Exploring new ways of doing things, sharing knowledge, and having a community that supports their efforts can’t hurt either. There’s a lot we Alaskans can learn from the farmers (or market gardeners) of Homer.