One day when I was biking around town photographing flowers and gardens (yes, I love my job!), I was surprised and delighted to discover a gem of a garden, farm even, behind the Fairbanks Princess Riverside Lodge. Both the size and appearance of the garden impressed me. I’ve seen tiny hotel or restaurant gardens with oversized claims of sustainability and farm-to-table practices. But the Princess garden is different. Not surprisingly, I found Gretchen Kerndt busily tending the garden. Gretchen has operated Basically Basil for more than 20 years in Fairbanks, with an emphasis on herbs and, well, basil. I interviewed Gretchen and Mark Winans, the food and beverage manager at the hotel, to learn more about why and how they created the so-called Chef’s Garden.

The hotel has always purchased locally grown food from local farmers, including Gretchen, but in the past few years, it’s gotten harder to fill their orders.

Mark explained, “We had the space out there. It was a no-brainer. We had the perfect opportunity. The tourists love it.” 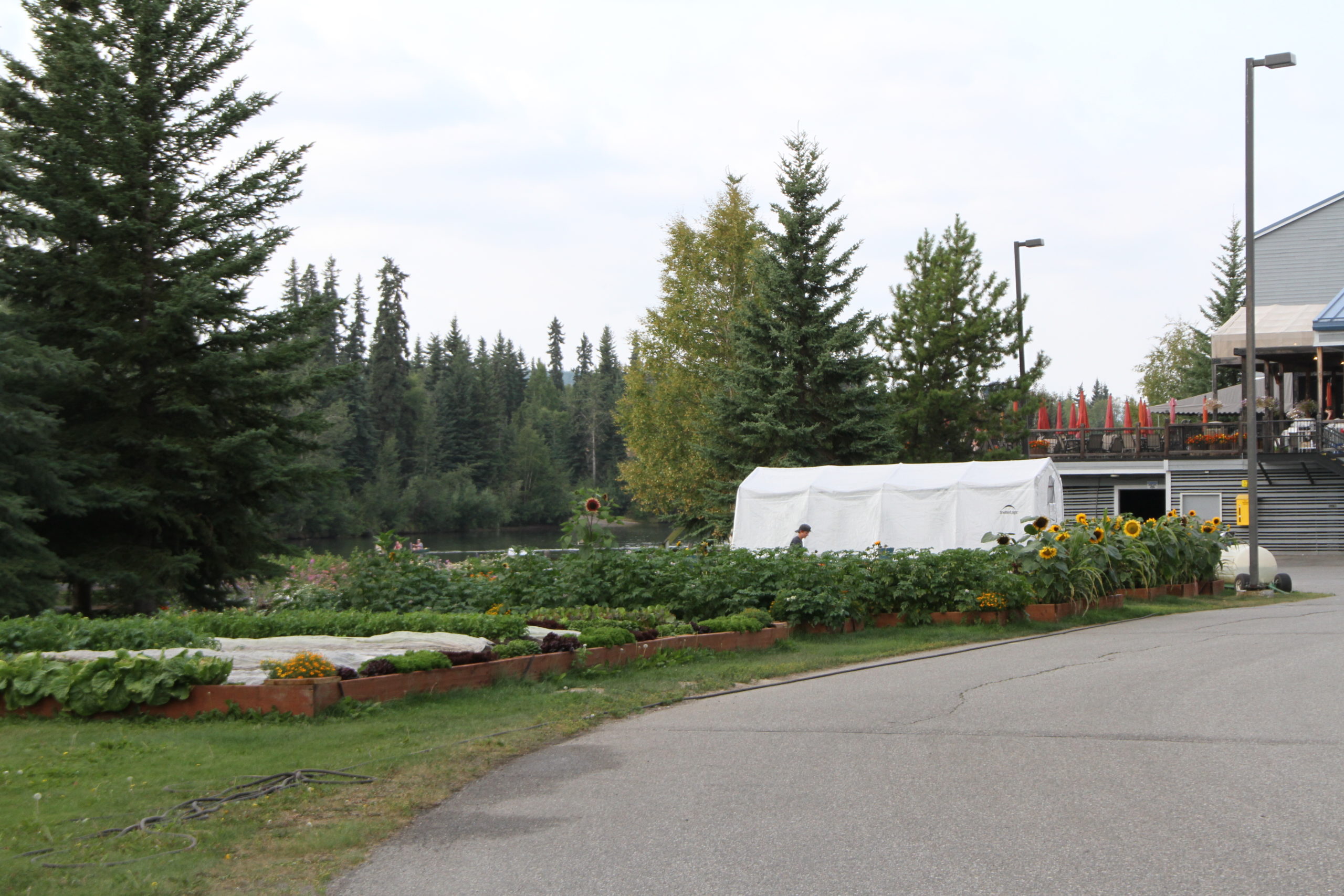 A view of the gardens adjacent to the outdoor dining deck at the Fairbanks Princess Lodge.

Gretchen added, “The aesthetics of the garden has intrinsic value. I don’t know how many times I see people out there who are taking photos. They are so excited.” They are gaga over the gigantic kohlrabi, cabbage and sunflowers. 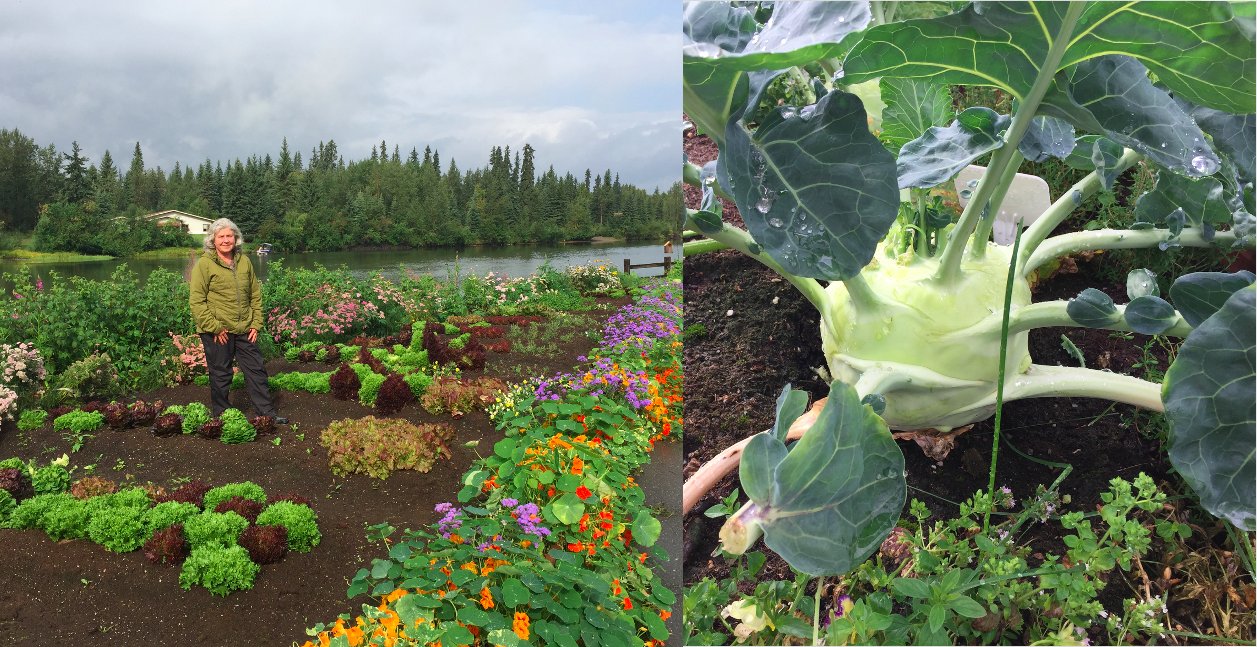 Gretchen Kerndt stands in the Princess Lodge Gardens she was contracted to develop. A giant green Kohlrabi growing in the Garden.

I asked what the biggest challenge with the garden was. “Just the time it takes, usually in the beginning of the season,” Mark said. “I build all the gardens. During that ramp-up period we go from 0 to 120 mph in a couple weeks. There’s time when I can spend time out there—I usually try to do that before we open.” In terms of cost, Mark thought growing their own produce was cheaper than buying it locally but not cheaper than non-locally grown produce.

Gretchen uses organic practices and has started a compost pile. I was curious if Princess might adopt this sustainable farm-to-table approach in other locations. Mark said that often they have extra produce they often give to their sister property, Westmark Hotels, and that Copper River Princess is very interested in adopting what the Fairbanks Princess Lodge has done. But while Princess operates cruises around the world, Alaska is the only location where it operates land-based lodges so the practice is not likely to take off worldwide.

Mark said that future plans include adding another large garden bed for growing Yukon Gold potatoes. They are used by the Fairbanks Distilling Company to produce 68 Below vodka. At the end of the season, Princess donates carrots and beets for a dinner that benefits the Fairbanks Children’s Museum.

Gretchen works as an independent contractor on the garden on a part-time, flexible basis. She mentors two additional Princess employees who also work part time on the garden. I think this arrangement could work for any number of institutions or businesses—restaurants, hospitals, schools and others. In fact, the Stone Soup Cafe and many local schools do have on-site gardens, but are slightly different than this setup because they are usually maintained by volunteers.

On-site gardens or farms grown for a specific outlet, like a restaurant or cafe, eliminate time spent on selling, marketing and transporting produce, which can add up. Crops can be harvested as needed, which cuts down on food waste. Also, the chef or cook can easily see what’s available from the garden, making it easier to integrate the garden produce into menu planning. 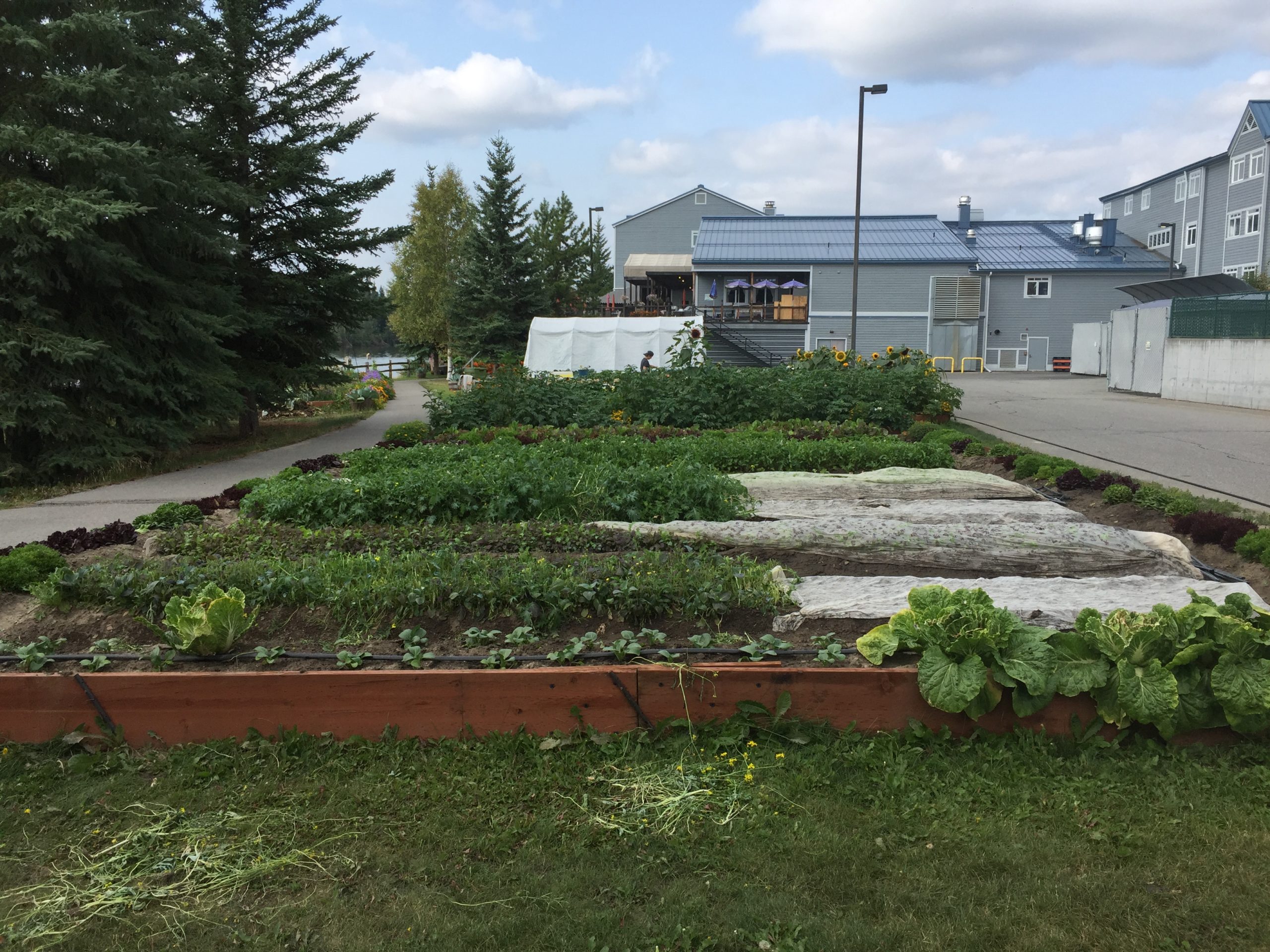 Raised beds with green vegetables growing outside of the Fairbanks Princess Lodge.

Gretchen summed it up, “I think it’s a great thing. I think it adds to the community. It’s educational. Empirically, you’ve taken a receiving area space and made it a beautiful garden.”

Tourists are often surprised to see the variety and the size of what can be grown here in Alaska.

If you want to sample fresh produce from the Chef’s Garden, look for menu items with “chef’s vegetables”.Most of the lettuce is also from the garden and, of course, herbs. On the menu that night was a mixture of cheddar and Romanesco vegetables sautéed with Swiss chard and collard greens. Mark also hosts a nightly wine experience that culminates in the garden.