My favorite type of pea is snap peas eaten fresh off the vine—a perennial kid favorite too. I’ve never intentionally grown shelling peas. I prefer growing things where I can eat most of what I grow—like with kale as opposed to Brussels Sprouts. Why give yourself the extra work of not only growing the pod but also shelling it? Maybe I’m just lazy because I don’t clean leaves and stems from my berries either. I guess if you have a dish you like that calls for shelled peas, then I would understand why you would do it.  Then there are snow peas where the entire pod is eaten. Their distinguishing feature is that they are flat, sometimes very large pods. So the basic categories of peas are snap, shelling, and snow but there are some grey areas. 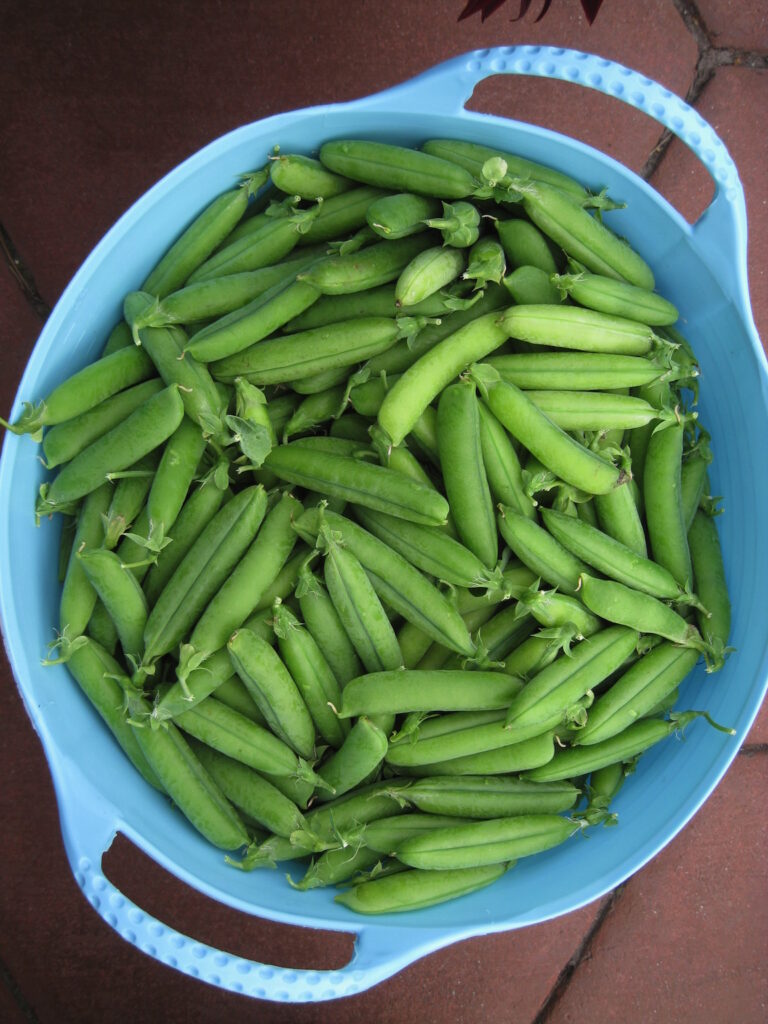 I had a bumper crop of Sugar Ann Snap peas one year when I had beautiful, deep, moist silt loam.

One of the confusing things about garden crops is the somewhat fuzzy categories that have been developed and how they don’t always best describe the varieties or types that are being grown. Julie Riley wrote an excellent article on peas, and has some good ideas for how pea categories could better be described. Strawberries are another good example of wonky categories that I have written about before. Julie also talks about the importance of planting peas early and knowing what type of pea you’re growing so that you harvest at the right time. 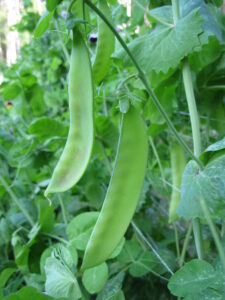 Snow peas on the vine

Sugar Ann, a snap pea, is one of my favorite varieties of peas, mostly because it matures in only 51 days so it is a quick way to start eating peas. Most snap pea varieties mature in about 51 to 60 days. Here’s a nice comparison of snap and shelling peas from Johnny’s Seeds. The shelling peas tend to take a little longer to mature (55 to 65 days) which is unsurprising given that you are only eating the pea inside the pod. Aside from days to maturity, taste is a consideration as is the harvest period. One thing I don’t like about Sugar Ann is that it has a short harvest period. If you can discipline yourself to plant peas successively, you will thank yourself for extending your harvest later. Alternatively, plant several varieties of peas that vary with their days to maturity.

Oregon Giant, a snow pea, is also one of my favorites. Oregon Giant is, well, giant and fantastic. Snow peas tend to mature in 60 days or more.

If you’re unable or don’t want to trellis your peas, look for a dwarf or bush variety. Some short varieties are developed with the intent of being harvested and eaten well before they produce peas, and the pea sprouts are eaten as a garnish.

Now, how do you grow peas? I like to soak my peas overnight before planting them and then coat them with an inoculant to increase their nitrogen production. I plant the peas about 2 to 3 inches apart in two rows that are 12 inches apart. Then I place drip irrigation in the middle of the row and trellis them. I use rows that are 30 inches wide. The most phenomenal peas I’ve grown were when I gardened in bottomless silt. The snap peas towered. Another year, when my garden was too close to trees with invading roots, they barely produced even a few pods.  So think deep soil and adequate moisture when growing peas. Voles and moose love them as much as we do.

If you grew an open-pollinated or heirloom variety, consider saving the seeds by letting the pods remain on the vine about a month after you would normally harvest them.

You can watch a video of growing peas in Alaska here. For more help choosing which pea varieties to grow in Alaska, see what Extension recommends for your region (Interior, Southeast, or Southcentral) and which varieties performed best in trials. Here are some more in-depth instructions on growing peas from Minnesota Extension.