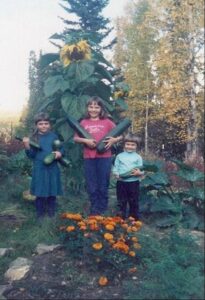 My sisters and I (far left) reluctantly helping harvest more zucchini in our Fairbanks garden. Photo by Maggi Rader.

I grew up in Fairbanks eating much more zucchini than any kid should have to. Of course I never minded when it masqueraded as bread peppered with chocolate chips. These days, kids in Fairbanks are lucky–they also get to enjoy winter squash and pumpkins which is becoming a much more feasible crop across Alaska.

Indisputably, the most knowledgeable and experienced winter squash and pumpkin grower in Fairbanks is Virgil Severns. He has grown the crop for over 30 years with his wife Anne and recently published a pamphlet on the topic. I wondered what attracted him to the crop originally and he said, “The thing that got me started really, years ago, the experiment station and the plant materials center offered a bunch of seeds and so I got some of those seeds and I planted them and they did well so it got me started growing squash.”

The pamphlet explains which varieties will grow best in Interior Alaska and cautions that some types (acorn, butternut, delicata, and sweet dumpling) are sensitive to our long days and as a result, do not produce female flowers in time for the fruits to mature. 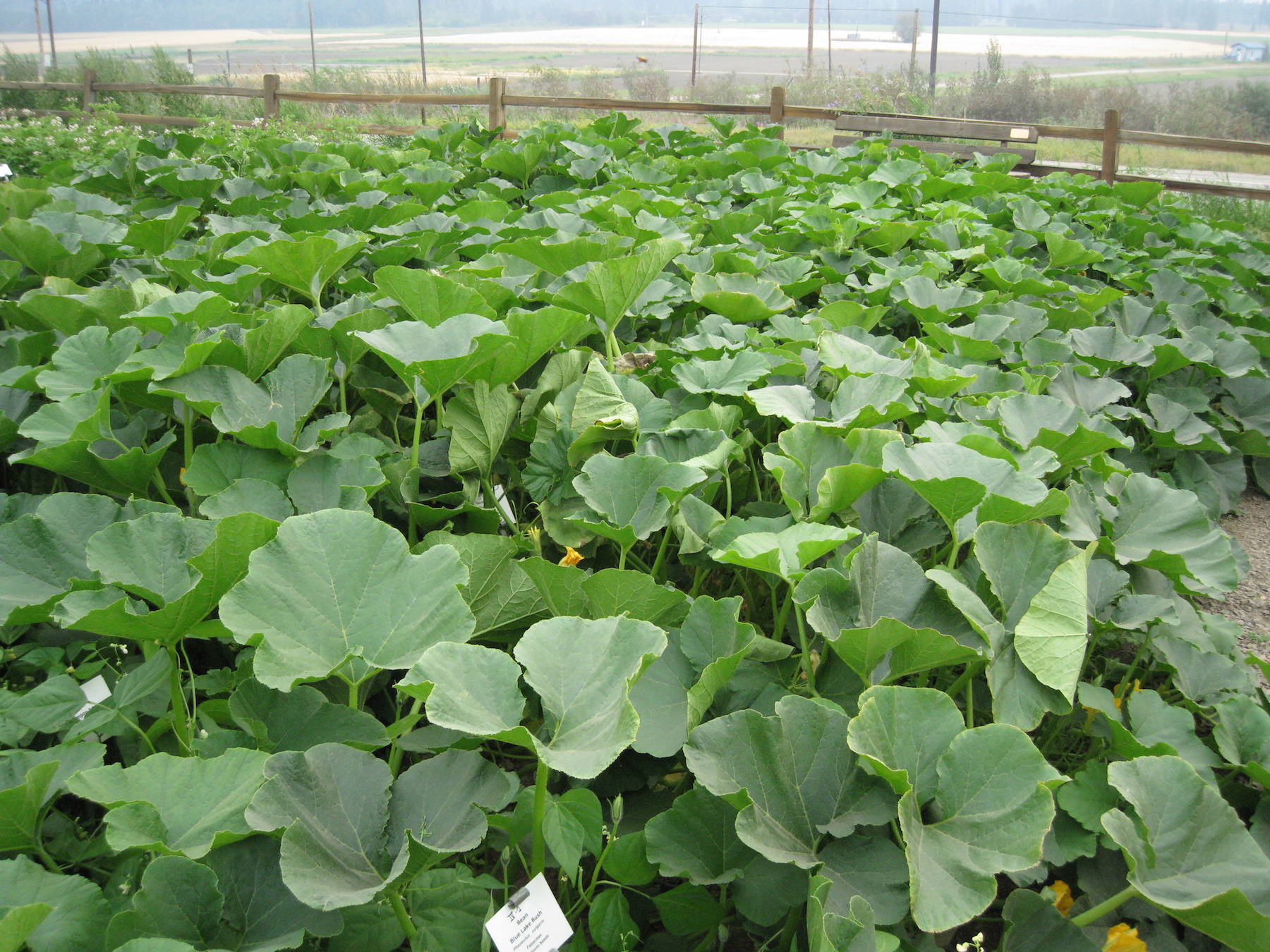 Pumpkin and winter squash trials at the Georgeson Botanical Garden in 2009.

Winter squash and pumpkins were trialed at the Fairbanks Experiment Farm for several years. After a more than decade hiatus, winter squash trials were started again in 2020. Impressively, Connecticut Field Pumpkin produced 205 pounds per plant in 2006 while Cornell’s Bush Delicata only produced 1.5 lbs. per plant when averaged over three years. In one year, possibly due to a cool summer, yields were low across the board. In 2020 preliminary trials, Spaghetti squash produced 85 lbs. per plant while Gete-Okosomin produced 46 lbs. per plant. Other promising cultivars included Bonbon, Sunshine (F1), and Red Kuri, while Sweet Reba and Honey Boat were very disappointing. In this video, Glenna Gannon describes the varieties and preliminary results for 2020.

When I asked Virgil which variety was the tastiest and he said without hesitation, “Sweet mamas. Sweet mamas are about as good a squash as you can get. Some people are very much in favor of Buttercup.” I sampled Buttercup from my sister’s garden this summer and she and I would agree that it is sweet and tasty.

If you have a small garden like me, consider growing a bush variety like Gold Nugget. If you have ample space, then grow one of the many vining varieties that may sprawl for 15 feet. As a bonus, if your Gold Nugget squash is late in maturing, Virgil says you can harvest the immature squash and eat it as a summer squash!

You’ll want to start seeds by the third week in April in a 4 inch pot so that the transplants are large enough when they’re transplanted outside to ensure that they have enough time to produce mature squash. Virgil switched from growing the crop under clear plastic mulch to Infrared transmitting (IRT) mulch with drip irrigation. The advantage of IRT mulch is that you not only get some soil warming but you also get some weed blocking. Long-time gardening guru Terry Reichardt grows her winter squash in a deep trench and then covers it with clear visqueen, as needed. 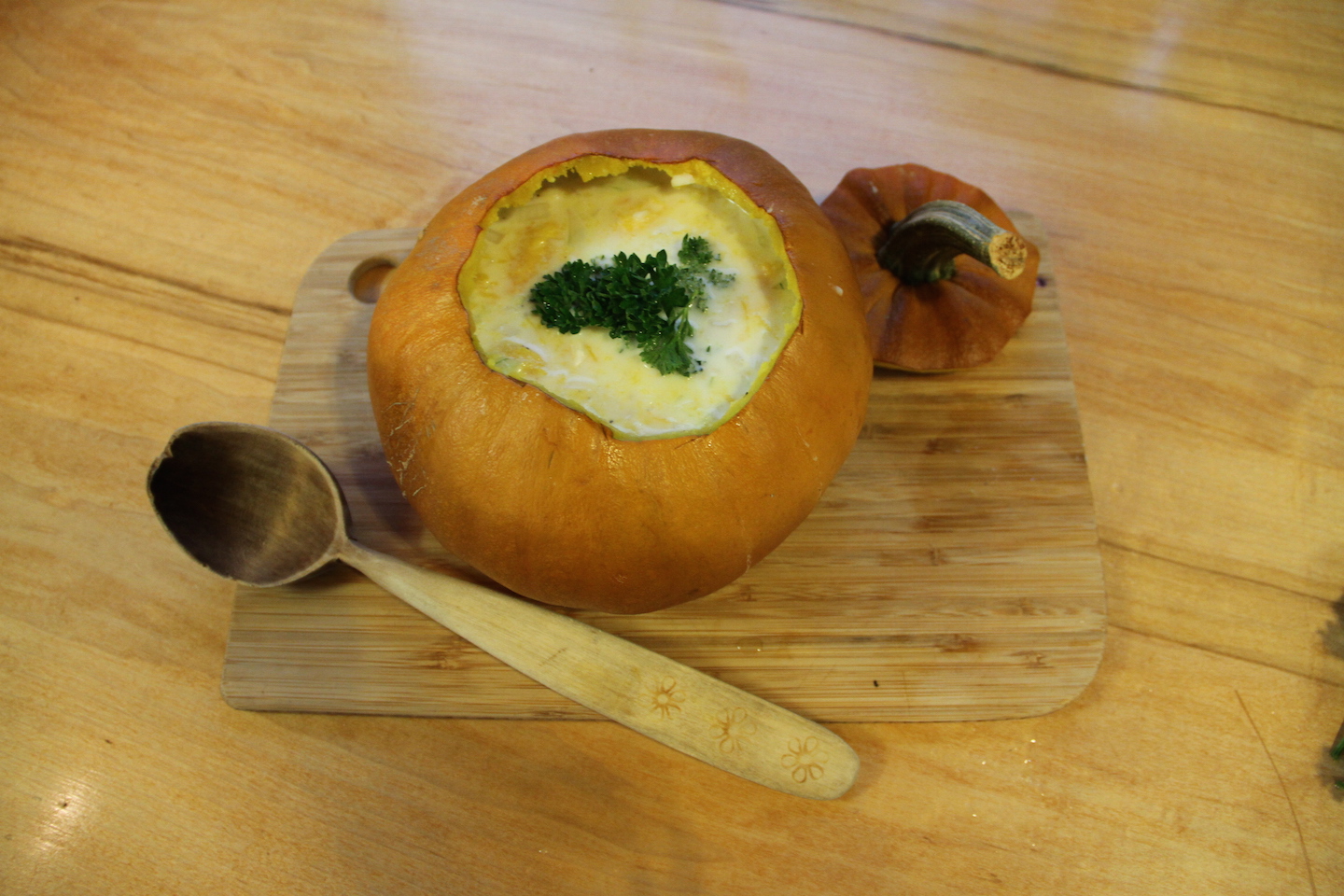 One fun way to eat a pumpkin is by making soup in the shell.

Along with recipes, our Cooperative Extension bulletin on winter squash instructs you to simply cut the squash into halves for baking. But it’s not always that easy. In his pamphlet, Virgil recounts using an array of burly implements to tame the squash including a large knife, machete, saw, mallet with a cleaver–and even a Sawzall for one stubborn Hubbard squash. Personally, I’ve found that if I cut off the ends, make holes with a fork, and microwave it for about three minutes (more for large squash), it makes peeling and chopping the squash much easier. Plus I get to keep all my fingers.

Another great thing about winter squash and pumpkins is that, if stored properly, they keep for about six months. Most years you can find winter squash in December at places like the Tanana Valley Farmer’s Market Winter Bazaar, or you can contact a farmer directly to see if they still have any for sale. Search the Alaska Grown directory for farms in your area that have “pumpkins” or “winter squash” listed.

For more information on growing winter squash in Alaska Email the publisher of “Winter Squash and Pumpkins for Northern Gardens” at hortalaska@gmail.com to order your copy today.